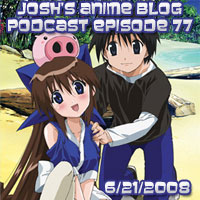 You can listen to my podcasts in the following ways:

Nagasarete Airantou is about a boy, Ikuto, who runs away from home to spite his father, whom he had a fight with, but ends up being tossed overboard from a ship during a large storm. Once he comes to, Ikuto finds himself on an island completely inhabited by women. On top of this, there is no way off the island as a series of whirlpools surround the island, preventing any escape by sea, with the only escape being possible when a tidal wave that comes around, on average, every 100 years hits the island. Of course, all the girls on the island, having not seen a man in 12 years or so since all the men were all swept away by such a tidal wave while off on a fishing expedition, are all crazy about Ikuto, and Ikuto’s dream of being on an island inhabited by only women immediately turns into a nightmare as every girl in the place wants him for herself.

Ikuto finally ends up staying with Suzu, the only girl on the island that lives by herself, and the only girl who seems to not turn into a wild animal upon seeing Ikuto. However, Suzu’s main rival Ayane wants Ikuto for herself, but on top of not being able to beat Suzu in anything, she has to deal with her sister, Machi, who is an expert in using the dark arts, mostly with the intent of torturing Ayane. Eventually the situation seems to calm down and Ikuto tries to start making a normal living on the island (which is still technologically in the 19th century), but man-crazed girls as well as talking animals who control wide swaths of the island keep popping up to make life miserable for Ikuto.

Overall, Nagasarete Airantou appears to be your standard harem comedy. Yes, he’s stranded on an island with only girls, which kind of ups the ante on this series, but at it’s base, it’s still a harem show where the lead faces the horrible nightmare of being chased by nearly every female in the show. Nagasarete Airantou certainly has it’s hilarious moments, but the series just seems to drag after a while, with many of the same gags used over and over, and thus losing their effectiveness over time. Also, the series didn’t seem to be very coherent, with the bulk of the series being one-and-done episode plotlines, resulting in no real central story line being established beyond “Ikuto must fend off all the rabid, man-hungry women.”

Also, the ending didn’t seem to resolve several of the major plot points that did exist. For example, we have the situation with Ikuto being told-off by his father that Ikuto would never be able to beat him, and it is the goal of Ikuto to finally be able to do that. Well, Ikuto never did that because he never got off the island. I held Ikuto’s relationship with his father in mind through most of the series, fully expecting that Ikuto would find a way off the island and resolve that plot point by the end of the series, but it never happened. Also, while Suzu and Ikuto’s relationship clearly advances over the course of the series, there is nothing that seems to cap it off. No kiss. No confession. They just end the series as a de facto couple, but nothing to really set it in stone.

The animation is probably the best thing about this series, as it is overall pretty good, though not excellent. The music was also pretty good I thought. However, the story, or lack-thereof just drags this series down too much for me. If you’re a fan of harem anime, then you’ll probably enjoy this series. However, if you’re looking for a series with any sort of depth, you just as well skip this.

It’s the final episode of Nagasarete Airantou! Will Ikuto be able to get off the island? Will he be able to save his sister? What is the Dragon God of the Sea? Find out everything in the series finale.

END_OF_DOCUMENT_TOKEN_TO_BE_REPLACED

It’s episode 24, and wouldn’t you know that sending messages in a bottle over the ocean actually works? Except that Ikuto’s sister, Misaki, appears to have gone out looking for him and has gotten lost along the way. Now Ikuto wants to try to get off the island (again) in order to save his sister. But will his attempts to leave be (once again) futile?

END_OF_DOCUMENT_TOKEN_TO_BE_REPLACED

It’s episode 23, and seemingly knowing that School Days 12 would be delayed, Nagasarete Airantou went ahead and aired a school episode of their own. But what’s this? Suzu is content being a moron delinquent? Well, we can’t have that now can we?

END_OF_DOCUMENT_TOKEN_TO_BE_REPLACED

It’s episode 22 and look! It’s a plane! It’s superman! No! It’s a bird! A pretty glowy blue one too which blesses whomever sees it. Too bad it can’t get Suzu, Yukino, and friends out of this crevice.

END_OF_DOCUMENT_TOKEN_TO_BE_REPLACED

It’s episode 21. We’re getting into the home stretch of the series now, and has Machi finally met her match this week? We also learn about Rin’s deep, dark secret. Also, if you’re a fan of Machi’s evil eye, you’ll love this episode as we see many variations of it.

END_OF_DOCUMENT_TOKEN_TO_BE_REPLACED

This time I’ve decided to combine my writeup for Episode 19 and Episode 20, mainly because it’s a two part episode. This time we get introduced to yet two more characters, and one has to start wondering if Airantou magically vacuums up anything and everything that is weird in the world (I mean, it already has talking animals, huge vegetables, a kappa, and magic. What’s one more thing?).

Also, an evil menace shows up and threatens to turn everyone’s trip to the hot springs into a night of frights. Can Ikuto stop the intruder?

Lots and lots of pictures this time, so it may take a while to load. I also have updated pictures from the opening sequence with Shinobu at the end.

END_OF_DOCUMENT_TOKEN_TO_BE_REPLACED

Episode 18 rolls around, and this week we have a new character, we learn about the Legend of Ikuto, and we get a grand dose of Suzu jealousy along with enough nosebleeds to satisfy this month’s quota. Also, I get pwned over Mikoto’s family tree and we get an addition to the ending credits.