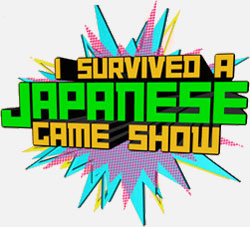 Don’t forget, the second season of I Survived a Japanese Game Show starts tonight on ABC at 9pm, after Wipeout.

This season splits 12 people (vs. 10 for last season) into 2 teams to complete in the “Japanese-like” game show Majide.  This season is allegedly supposed to have more games and less behind-the-scenes dorama, which even I felt was the show’s biggest weakness last year.

Indeed, initial interest in the show was fairly decent (the season premiered at #2 in the time slot vs. America’s Got Talent, only to fall out of the top 4 by the end of it’s 7 episode run).  I’m guessing that the success of the zany obstacle course game Wipeout has caused ABC to decide to try again on ISaJGS since it’s very much up the same alley.  It’s just that Wipeout was obstacle course from start to finish while maybe only 1/3 of ISaJGS actually consisted of contestants competing.  We’ll have to see tonight how much ABC increased that ratio.  I’m not expecting start to finish games, but hopefully at least a majority of the episode is dedicated to games.

The show was orginally supposed to start airing in July, but was pushed up to this week (maybe the Goode Family wasn’t faring that well?)